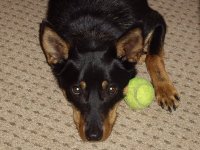 This week we’re settling in to our new digs…

We’re housesitting a two-bedroom place near heaps of parks and shops and guess what?

The house comes with a great dog too! Roo is a 2-year-old Kelpie and has been around babies heaps. He’s very generous with his patience when Fergus is wailing and also very interested in Fergus’ smells and toys. Roo has loads of dog toys ripped apart about the place, but so far hasn’t touched any of Fergus’ toys. Instead he quietly sniffs and then settles on his mat (or at my feet when I’m feeding Fergus).

We’re going to keep a constant eye on them while they’re together, but so far it looks to be a great friendship in the making. Fergus loves Roo and is learning already to pat him “nicely” (instead of yank out a fistful of hair!).

Roo’s an inside dog, and lots of people have told us we should shut him outside now that there’s a baby in the house. Turns out that’s not the accepted logic when it comes to introducing babies to dogs… 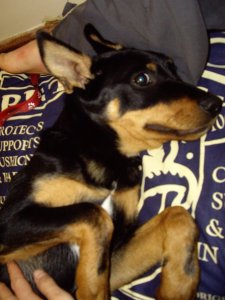 I googled “dog” and “new baby” and found lots of nice tips, mostly:

1) Plan early and bring your baby home to a well-trained dog
Roo walks well on a lead, responds to basic commands, has been around babies before: we’re well ahead on this one, so “tick”!

2) Don’t stop loving your dog when the baby arrives
The dog will associate the baby with bad things. Instead, love your dog a little big extra when the baby is around. He’ll learn to love the baby too. We’re now working on developing this positive relationship, so “semi-tick”.

3) Don’t leave dog and baby alone, ever, even if everything is going A-OK
I put Fergus in his cot and then left the room so see what Roo would do. As soon as I was gone, Roo stood up and approached the cot, sniffing gently, then he left the room and went to Fergus’ play gym, sniffing the edges of that too. He didn’t do anything aggressive, but he did show extra interest when he thought I wasn’t looking. We love Roo already, but we’re planning to be ever-vigilent just the same. So “tick” on this one too.

But I did find some more cool writing competitions, including:

– a songwriting competition where you can win a Gibson Guitar

And of course, don’t forget to get your entry ready for the 2010 Frances Lincoln Diverse Voices children’s book award. It’s free to enter, anyone around the world can enter, and you can win 1500 pounds plus a publishing deal. Go gettem!