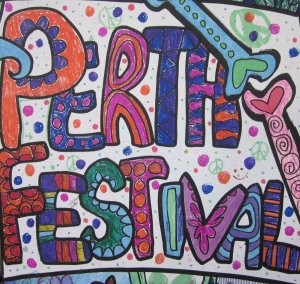 After the festival was over…

I’m sitting at home, taking out my metaphorical glass eye.

And I’m procrastinating wildly, because I now know for certain that I have to ditch the first 20,000 words of my new novel and start again.

It’s not that the start isn’t good; it’s just not the right start for the story.

Goodbye, enormous chunk of sweat and tears and typing

It hurts to know these first chapters have to go, but I’m not in total mourning because I know the new start will help the story to breathe.

So far I’ve been pushing words uphill and that’s never fun. I prefer to write when the story just won’t stop coming.

But for now, I’m tidying my desk, and as part of that I’m going through notes from last weekend’s Perth Writers Festival. I thought I’d share some tidbits from the workshops I attended:

Paula Hart, artist
Paula is the pen-genius behind the interactive murals that were part of the kids stage at Family Day. She drew the black-and-white characters and kids of all ages and sizes helped to colour them in. The images on this page are sections of that mural. I joined in the colouring and it was FUN! Thanks Paula!

David’s crime writing workshop focused on how to pull a braided narrative together.

The braided narrative is common in crime fiction, where each ‘strand’ is narrated from a different character’s point of view (written in third person). When woven together, the braided strands are strong enough to carry a more powerful story.

I usually write from just one person’s perspective, but as David pointed out, if you’re only inside one character’s head, you never get a detailed look at the motives and backgrounds of the other characters. And when you’re talking crime, that’s just too black-and-white. Who decides what constitutes a crime anyway? And what constitutes truth? You need several characters to weigh in with what they think. 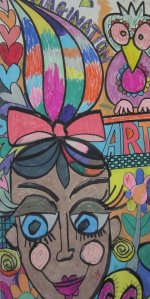 I haven’t read Anthony’s fantasy, but his writing for kids is hilarious (as is his live presentation for kids: if you get a chance, see it!) so I was keen to meet him (plus his sister-in-law is in my sister’s book club, so we’re virtually family, right?).

Anthony’s workshop was on fantasy writing and I was horrified to learn that his recent trilogy took ten years to write, including two false starts (of tens of thousands of words each!!). That takes some determination!

Still, he seemed chirpy and he survived the rewrites to produce three awesome-looking books. I’m taking courage from this (deleting 20,000 words is nothing, right?; it’s just the getting-to-know-you stage of a book)(I try not to weep).

– Writers block: It doesn’t exist. If you get stuck with writing words, put away your keyboard, pick up your pencil, and sketch the scene you’re trying to write.

– Universal truths: Fantasy novels work best when they include some universal truths/touchstones of truth that readers can identify with. This can be as simple as a character needing coffee in the morning, despite living on another planet.

Did anyone else go to the festival? Any highlights? Any writing tips or recommended reads?

2 thoughts on “More writing tips from the Perth Writers Festival: crime and fantasy”