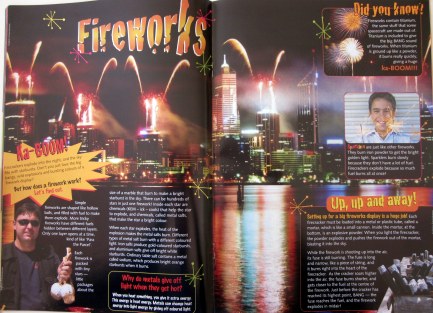 Firecrackers explode into the night, and the sky fills with starbursts.

Want to explain the science of fireworks and sparklers?

Don’t you just love the big bangs, wild explosions and bursting colours of a firework display?

But how does a firework work?
Let’s find out.

Simple fireworks are shaped like hollow balls and filled with fuel to make them explode. More tricky fireworks have different fuels hidden between different layers. Only one layer opens at a time, kind of like “Pass the Parcel.”

Chemical starbursts
Each firework is packed with tiny stars—little packages about the size of a marble that burn to make a bright starburst in the sky. There can be hundreds of stars in just one firework.

Why do metals give off light when they get hot?
When you heat something, you give it extra energy. This energy is heat energy. Metals can change heat energy into light energy by giving off coloured light.

What about sparklers?
Sparklers are just like other fireworks. They burn iron powder to get the bright golden light. Sparklers burn slowly because they don’t have a lot of fuel. Firecrackers explode because so much furl burns all at once!

Did you know?
Fireworks contain titanium, the same stuff that some spacecraft are made out of. Titanium is included to give the big BANG sound of fireworks. When titanium is ground up like a powder, it burns really quickly, giving a huge ka-BOOM!!!

Up, up and away
Setting up for a big fireworks display is a huge job. Each firecracker must be loaded into a metal or plastic tube, called a mortar, which is like a small cannon. Inside the mortar, at the bottom, is an explosive powder. When you light the firecracker, the powder explodes and pushes the firework out of the mortar, blasting it into the sky.

This article first appeared in CSIRO’s Scientriffic magazine.
Thanks to bestanimations.com for the terrific fireworks gif