From an oncoming aeroplane to a more loving planet Earth, the winning artwork from the 2017 Shaun Tan Award for Young Artists was awesome. What will 2018 hold?

Which young artists will be brave enough to enter? Whose artwork will spark our imaginations and capture our hearts?

2018 is the 16th annual Shaun Tan Award for Young Artists. If you’re in Years 1 to 12 and go to school in Western Australia, you’re in with a chance! Entry is free, but you need to get your pencils out quick-smart: entries close 4pm on Monday 21 May.

My Earth Dream, by Rishitha Venkatesh

Rishitha Venkatesh, 11, won 2017’s Upper Primary category. She says her pen-and-watercolour artwork, ‘My Earth Dream’, is one of her most outstanding achievements.

“It is mainly about how I want the Earth to be right now, and for the future generations,” she explains.

“I knew that the message behind the artwork was very important, and that I really like animals.

“The message I am trying to communicate through the artwork is that, after what we have done to our planet, it is up to us to save the animals and plants of Earth. We need to rewrite our wrongs,” she says. 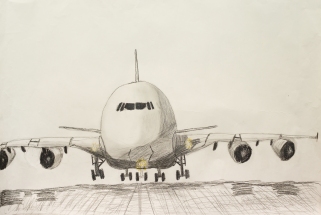 “It’s an Airbus A380 passenger aircraft thundering down the runway ready for takeoff,” Cameron explains. “My picture gives the viewer an experience of seeing the aircraft head-on…

“[It] was more dramatic than I had expected, and became more than just a picture of an aircraft. I was proud of myself when I showed my parents.”

Cameron was inspired to try drawing an aeroplane after flying in one during a holiday. “I really like vehicles, and the only vehicle I had not drawn was an aircraft.”

Rishitha and Cameron both knew what they wanted to create, but it didn’t always come easy.

“I had a rough idea how I wanted it to turn out,” Rishitha says. “In my first attempt, I wasn’t too satisfied… so I tried again.”

Cameron agrees: “I drew the picture once, but used an eraser lots,” he says. “I planned some of it, because I knew that some of the wing would not fit on to the paper.”

The Young Artist awards are designed to inspire creativity and imagination, and Rishitha says they certainly achieve their aim: “Just participating in this amazing event is a privilege. Everyone should have a go!”

The awards are run by the City of Subiaco. This story first appeared in Crinkling News.