On this International Astronomy Day, let’s have a shout-out for our First Peoples, and all those incredible Aboriginal astronomers who passed down knowledge over tens of thousands of years.

Early Aboriginal astronomers could identify thousands of stars by name. They used this knowledge of the sky to predict changing seasons, tides, and navigate country. Several Aboriginal cultures recorded comets and meteors, or had accurate theories about solar and lunar eclipses. Some researchers believe their astronomical observations might pre-date Egypt’s pyramids and England’s Stonehenge.

“There’s lots of depth and complexity in Aboriginal cultures, lots of great intellectual achievements,” says CSIRO astrophysicist Ray Norris, who studies Aboriginal astronomy. “We have a lot to learn from the Aboriginal people.”

“Many of these stories have been lost,” he says, “but let’s try and make sure we record what there is.” 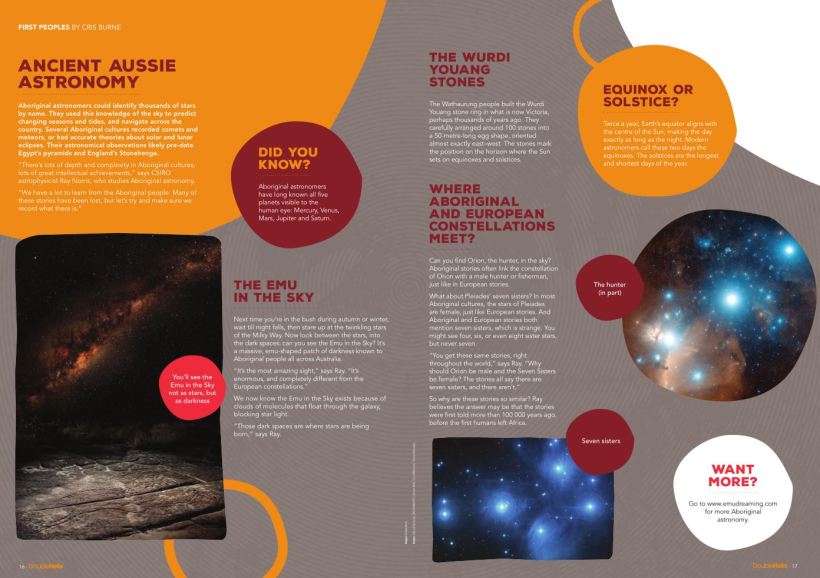 The Emu in the Sky

Next time you’re in the bush during autumn or winter, wait till night falls, then stare up at the twinkling stars of the Milky Way. Now look between the stars, into the dark spaces… Can you see the Emu in the Sky? It’s a massive emu-shaped patch of darkness known to Aboriginal people all across Australia.

“It’s the most amazing sight,” says Ray. “It’s enormous, and completely different from the European constellations.”

We now know the Emu in the Sky exists because of molecule clouds floating through the galaxy, blocking the star light. “Those dark spaces are where stars are being born,” says Ray.

The Wathaurung people built the Wurdi Youang stone ring in what is now Victoria, perhaps thousands of years ago. They carefully arranged around 100 stones into a 50-metre-long egg shape, oriented almost exactly East-West. The stones mark the position on the horizon where the Sun sets on equinoxes and solstices.

Equinox or solstice? Twice a year, the Earth’s equator aligns with the centre of the Sun, making the day is exactly as long as the night. Modern astronomers call these two days the equinoxes. The solstices are the longest and shortest days of the year.

Orion and the 7 Sisters

Can you find Orion, the hunter, in the sky? Aboriginal stories often link the constellation of Orion with a male hunter or fisherman, just like European stories.

“You get these same stories, right throughout the world,” says Ray. “Why should Orion be male and the Seven Sisters be female? The stories all say there are seven sisters, and there aren’t.”

So why are these stories so similar? Ray believes the answer may be that the stories were first told more than 100,000 years ago, before the first humans left Africa.