Some of you might think Benten is a ten-year-old boy with an awesome watch and a habit of turning into alien creatures. Well, you’re half correct.

Because you’re missing out on the original Benten (弁天):

For a start, Benten isn’t a boy, she’s a woman. And she’s around 1500 years old, not 10. And she doesn’t turn into aliens because she’s already a god and often has eight arms, plus she’s good friends with dragons and enormous snakes.

So Ben 10, eat your heart out. Benten is awesome! 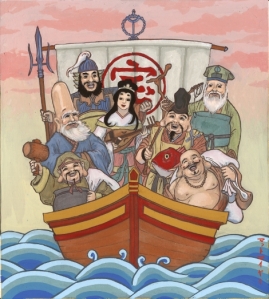 Before Ben 10, there was 弁天

Benten is one of the seven Japanese gods of good luck, and she’s the only female representative on the team.

She’s hugely popular in Japan: she’s the goddess of water and oceans, she protects against disaster, and she’s associated with artistic learning and wisdom and general prosperity. So she’s quite the god to have on your side.

Especially when you consider the dragons.

Benten is also called Benzaiten, though when she first came to Japan from India, she was called Sarasvatī.

She likes to play the biwa (Japanese mandolin), so she’s easy to spot in paintings and sculptures, although when she appears with eight arms, she ditches the biwa and instead carries a bow, arrow, sword, ax, spear, long pestle, iron wheel, and silk rope.

So again: don’t mess with this lady! She’s absolutely my kind of goddess.