I’m loving it! I’ve just finished reading The Luminaries, which is AMAZING and totally worth the months of dedicated reading it took me to finish. I’m also: 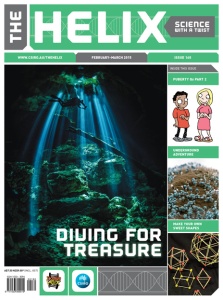 – preparing for the 2015 heARTlines festival of children’s literature and book illustration,

– working on some fab fun Scientriffic and Helix articles on diving for treasure, stunt doubles and the secret life of reindeer.

Need to go to bed early? You better believe it 🙂

Digging in the dirt

Below is a short article that first appeared in this month’s Scientriffic… When I read Terry Gates’ comments, I think digging Rhinorex out of the rock is much like editing a novel out of a mess. What do you think?

Some dinosaurs had bony head crests, others had spiky armour. This newly discovered herbivore had an enormous nose.

Named Rhinorex condrupus, where rhino is the Latin word for “nose” and rex means “king”, the dinosaur’s fossilised bones were found in Utah, USA.

“It took two years to dig the fossil out of the sandstone it was embedded in,” says researcher Terry Gates. “It was like digging a dinosaur skull out of a concrete driveway.”

The bones had hardly moved in the 75 million years since the dinosaur died, a clue that leads Terry to suspect Rhinorex died quickly, perhaps in an attack by giant crocodiles that roamed the swampy estuary where it lived.

Terry estimates Rhinorex was around 9 metres long and weighed nearly 4000 kilograms, including its nose.

“The purpose of such a big nose is still a mystery…We are already sniffing out answers to these questions,” says Terry.