My first copy of Takeshita Demons arrived in the post! Wheee! It’s very strange, and it certainly doesn’t feel like “my” book. The letters that spell my name on the cover just seem to be some random jumble of foreign symbols. Very odd.

Don’t you think it  looks GREAT!!! 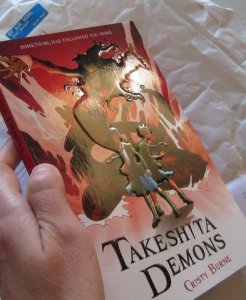 So a few questions remain:

How do you pronounce “Takeshita”?

It’s the one question everyone is certain to ask me, and, if you’ve ever studied Japanese at school, you might have an idea.

The word “takeshita” is made up of “ta-ke” or 竹, meaning bamboo, and “shita” or 下, meaning beneath.

TA: “ta” sounds like “ta-ta”, the word that many English-speaking babies use to say “goodbye”
KE: “ke” is the same as in “kettle” or “kennel”.
SHITA: The “shi” sounds like the English word “she” (as in “she studies Japanese”) and the second “ta” also rhymes with the English word “ta-ta”, but is squashed together into one syllable with the “shi”, making a sound like “sh-ta”

How do you write “takeshita” in kanji?

The kanji used to write “takeshita”are really cool, because they look like the word they describe: 竹下

Check out “ta-ke” or bamboo: 竹
You can imagine the two long vertical lines are long, straight bamboo plants, reaching to the sky. The details at the top of the kanji are like the leaves of the bamboo, waving in the breeze.

And “shita” or beneath looks like this: 下
There’s one long horizontal line at the top of the kanji, and then everything else is below or beneath that line.

I love kanji, and I love Japanese language. It sounds SO beautiful and fluid, and it’s so logical, so the rules of grammar and spelling are easy to learn. And that’s a huge relief for me!!! (My least favourite grammar rule is “I before E except after C” because it’s not even a real rule!!!!!)

I met some cool kids at a wedding on the weekend (and two of them, incidentally, spoke Japanese!) and it was ace to play with them on the kiddies’ table while all the adults made conversation instead.  We played heaps of games, including “I give you”, which we made up on the spot. In the game, you take turns giving each other imaginary gifts: you can give powers, or magical instruments, or, if you think someone’s getting too many powerful gifts, you can give them a giant toad or an empty swimming pool, just to even things out 😉 It was GREAT! One of the greatest bits about being an author for children is that you get to play with kids. YAY!