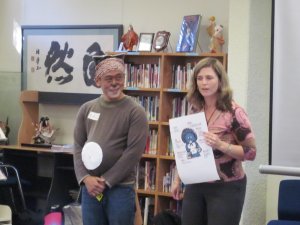 The Hyogo Centre’s Melissa Luyke with professional actor Shingo Usami in disguise as a tanuki.

Today I was at the Hyogo Prefectural Cultural Government Centre as part of a series of workshops organised by Ms Yuko Fujimitsu, Japanese Language Advisor for the Department of Education as part of the National Asian Languages and Studies in Schools Program (NALSSP).

We worked with Year 9 students from three schools (including my own school, Leeming Senior High School!) and spent the entire day in a Japanese environment…

And that’s where I was lucky enough to come in, because a big part of Japan’s culture is its mythology, history and folklore, showcased very nicely in some of Japan’s ghost stories and yokai tales.

There was a big emphasis on new or different teaching techniques and ideas for introducing ordinary grammar into the classroom.

Tanukis love to use their large bellies as drums. I’m using mine to grow a baby, but still, Tanuki Shingo’s belly is bigger!

– watching GeGeGe no Kitaro (perhaps the most famous yokai in the world) fight the awesome gyuuki (or ushi-oni).

– folding and pinning origami leaves onto a money tree (for donation to the Pray for Japan cause),

– language learning through drama (led by actor Shingo Usami), art (using the Art Speaks Japanese language resource kit put out by the Japan Foundation Sydney), and literature (me and some of the Takeshita Demons)

– Lots of practise in listening and speaking Japanese, especially when it came to lunchtime (no polite request for a bento box lunch in Japanese = no bento box lunch!)