If you could design your own robot, what would it be? Would you create something to tidy the house? Drive the car? Or hand you flat whites while you luxuriate on the couch with a great book? (Clearly, I vote for option 3.)

But there is another option: use modern technology for something really worthwhile. Like koala conservation… 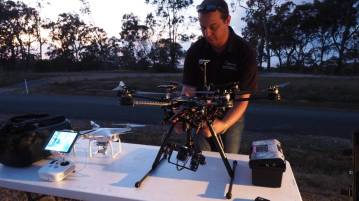 Flying robots with heat-sensing eyes can find koalas, even in thick bush.

The unmanned robots, called drones, look like giant flying spiders, and they’re part of an effort to help save koalas in the wild.

Researchers on the ground control the drones, which fly high above the bushland to find and count koalas much faster than humans can.

“I’m pretty good at spotting koalas,” grins Associate Professor Felipe Gonzalez, who leads the Queensland University of Technology project. “But I’m nowhere near as good as a drone.”

Where a team of experts might take two hours to search for koalas in an area of forest, a drone can cover the same area in just 20 minutes.

“When we have a better idea of where koalas are, and how many we have, we can use that information to plan conservation efforts and make decisions,” says Associate Professor Gonzalez.

Eyes in the sky

The helicopter-style drones are programmed to fly over forests “in a lawnmowing pattern”, so they don’t miss a single tree.

They can spot a koala from 20 metres away, so they don’t scare the animals either.

Each drone carries a camera that can sense the heat produced by a koala’s warm body. Remotely controlled, the cameras can twist and turn to offer researchers the best view.

Unmanned flying drones have been around for years, but Associate Professor Gonzalez says the ones being developed at QUT are “unique”.

“They use artificial intelligence,” he explains. “They’ve learned to tell the difference between a koala and other animals by the size and shape of the hot spot.”

Artificial intelligence, or AI, is a form of machine learning. It means the computers on-board the drone can train themselves—by trying and failing and learning from their failures—to correctly identify koalas.

An aerospace engineer by training, Associate Professor Gonzalez says making flying robots is a natural combination of his skills in maths and engineering and his life-long love of the environment.

“Ever since I was a kid, I’ve always been interested in animals and ecology,” he says.

He wants to use the drones to monitor other animals in the wild.

“We’re hoping to use this technology to track dingoes, on Fraser Island,” he says.

“We can also use it for wild dogs and feral cats.”

The number of koalas in the wild is decreasing: the Australian Koala Foundation estimates there are only between 43,000 and 100,000 wild koalas left.

Koalas live in woodland and suburban areas in New South Wales, Victoria and South Australia, and are classified as endangered in Queensland.

The drones are being trialled in South East Queensland, where wild koalas must share their habitat with a growing human population.